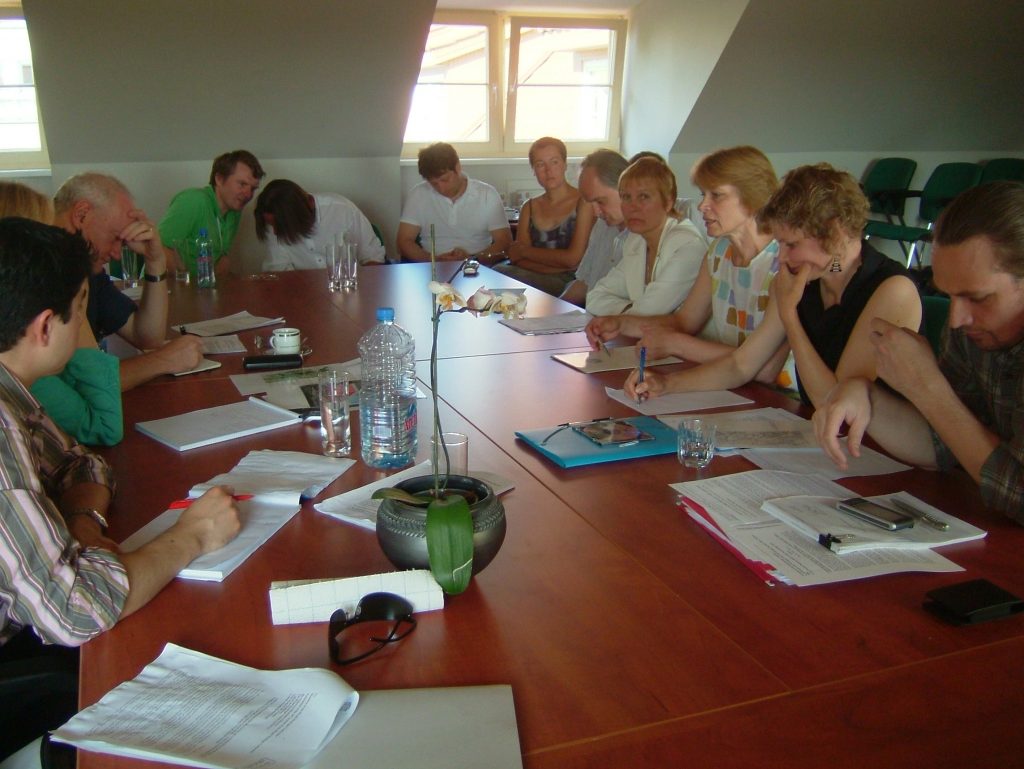 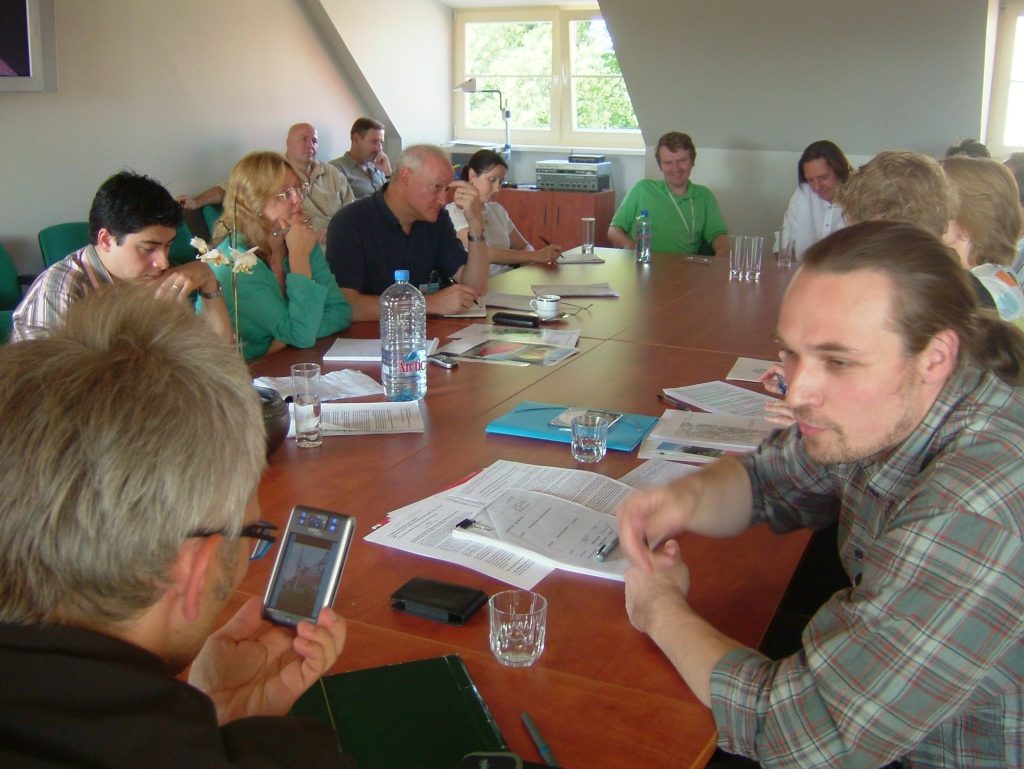 Concerning the Destruction of Cultural Heritage and Cultural Open Spaces within a Cultural Heritage Object: the Historic Centre of Vilnius
The UNESCO World Heritage Committee will hold its 30th session in Vilnius on July 8-16, 2006. To the undersigned citizens of Vilnius, members of non-governmental organizations and participants of public-initiative groups, this event offers one more opportunity to express our concern about new incompatible developments within the world heritage centre of Vilnius, during the last few years, destroying authentic cultural heritage and removing open cultural spaces from public use.

In the last few years there were several initiatives addresses to the World Heritage Committee concerning the destruction of cultural heritage in this UNESCO protected object: Concerning the Construction of Underground Garages in Vilnius Old Town, and the Agreement on the Establishment of a Parking System in the City of Vilnius, signed by the Vilnius City Government under the City Council’s December 29, 1999 Decision No 482 (01.03.2001); Re: Preservation of the Outstanding Universal Value and Authenticity of the World Heritage Site – Vilnius Historic Centre – for the Common Good (12.05.2005). Conclusions reached by UNESCO experts helped avoid the threats listed in the above appeals.

We are now addressing our appeal regarding a special public cultural space in the centre of historic Vilnius – the cinema theatre “Lietuva” (Pylimo Street 17) and the open spaces surrounding it, whose destruction the Vilnius Municipality may legalize in the very near future – at the beginning of July.

The project calls for demolition of the existing theatre “Lietuva” [Appendix 1], and in its place and the surrounding territory, the construction of a large scale residential complex with underground parking for 120 automobiles [Appendix 2].

There are serious grounds to believe that this new development, in the centre of historic Vilnius, inscribed in the UNESCO World Heritage List, is incompatible with the Convention Concerning the Protection of the World Cultural and Natural Heritage ratified by the Lithuanian Republic in 1992, wherein the state pledged itself to protect world heritage within its territory. Were this development realized, it would cause irreparable harm to world heritage authenticity and values of this locality, protected by the UNESCO World Heritage
Convention.

Our case is based on the following grounds:

1. The authenticity of this locality would be essentially reduced:
1.1 The scale and density of the planned new development and the uncharacteristic buildings for this locality would change its historic character and inner spaces:
·    the planned density of the plot is much greater than the present density and is historically uncharacteristic for this area; the massive building would destroy the Vingriu springs from which the first water supply conduit was laid in Vilnius in the XVIth century, and break up the central natural heritage of historic Vilnius: the green terraces of the southern slopes;
·    the height of the new construction is incompatible with the historic cityscape, which, as a heritage value of the historic centre of Vilnius is defined in the World Heritage Nomination Files. It is on the basis of this document that the cityscape should be protected, which was formed before the end of the XVIIIth century, when on this territory stood low palaces, mansions, along green slopes with the Vingriu springs [Appendix 3] encompassed by the defense wall of the city along Pylimo Street;
·    the height of the new construction is adjusted to the highest of the XXth century buildings standing in the vicinity, which in their massiveness, are already casting a negative influence on the values protected in the historic centre of Vilnius [Appendixes 4 & 5];
·    instead of the historically typical density, where distant vistas were visible between the houses, a characteristic that needs particular protection in the historic centre of Vilnius, there would now appear a perimeter structure that would block the view presently open to Tauro hill and the ancient Vingriu springs on its slopes.

1.2 The construction of underground garages would destroy the untouched archaeological layers now protected by the state: 120 parking lots under the planned apartment complex and, adjoining, another 300 on the historic territory of the Malku Market, made into a public square at the beginning of the XXth century.

1.3 Dangers to nature heritage:
·    the Vingriu springs, that provided the first Vilnius water conduit in the XVI c., would be destroyed [Appendix 6];
·    a portion of the Tauro Hill green belt, that still exists and is particularly important in this part of the historic center of Vilnius, would be destroyed and its continuity broken [Appendixes 6 & 7].

1.4 Other dangers: additional transport would be attracted to this territory and the flow of traffic along Pylimo Street and other adjoining narrow Vilnius streets would be intensified. In addition to the above mentioned (1.2) 120 and 300 lot parking garages, on the other side of Pylimo Street, at the intersection of Siauliu and Zemaitijos Streets, there is already under construction a 112 lot parking garage under the residential complex “Mikalojaus ziedas”.

In the historic center of Vilnius there is a serious lack of open cultural spaces and community oriented objects. One of the few remaining is the “Lietuva” cinema theatre and the environing open spaces and greenery, where activities important in the cultural life of the city took place during the past four decades and should continue for years to come. Vilnius municipality is now planning to allow this object and the surrounding area to be destroyed.

The cinema theatre “Lietuva” is an art house, preserving the European cinephile spirit, with the most popular annual festival in the country, with a 200 sq.m screen and two auditoriums with 983 and 85 seats. Built in 1965 it is the largest and the last of 15 cinema theatres in Vilnius, still standing but no longer operating, a witness to the cinema traditions of the city. The planned construction not only takes away a multifacetted cultural space from the urban community, but impoverishes the cultural authenticity of the historic centre of Vilnius, as a world heritage site.

During the “Cinema Spring 2005” film festival, 7000 signatures of visitors and Vilnius filmgoers were collected petitioning the preservation of the “Lietuva” cinema.

The existing cinema theatres, “Vilnius Akropolis”, in the business and entertainment centre, and “Coca Cola Plaza”, are far from the boundaries of the historic Vilnius centre and provide only commercial, mass culture and Hollywood products. Non-commercial and art house films, and their audience, will no longer have a venue in the historic centre of the city.

There is some controversy regarding the architectural appropriateness of the present cinema theatre. However, the new structure proposed will be far more injurious in its consequences to this World heritage site.

The planned new construction violates the pledge to UNESCO undertaken by the Lithuanian Republic to protect the universal outstanding value and authenticity of the historic centre of Vilnius, as well as Lithuanian Republic heritage protection laws, prohibiting new development and new construction in such heritage properties. Current legislation and undertakings to UNESCO allow only maintenance, conservation and restoration.

At the same time, we would like to bring attention to the fact that the case presented here is one of many similar instances taking place and being planned in the historic centre of Vilnius and its protection zone.